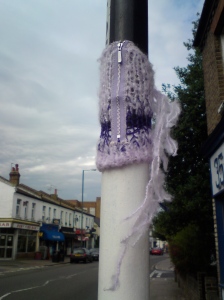 The square was knit, a picnic was just had and my fingers were eager to put in place my beloved new creation.. As we walked back from Twickenham green, i announced to my beloved that i was about to place said item in its new home “im not going to be with you when you do that” was the reply. So, off he marched with cushions, blanket and left over morsels of food so as not to be associated with “the crazy girl”.

A lovely pelican crossing was on route, so what better than to brighten up a dreary black and white striped pole than to embellish it a bit?….

I was pleasantly surprised that no one took any notice of someone wrapping a piece of the street in yarn, a mother shouted at her young daughter for making her miss the bus and i think the only people interested were the people buying a paper in the newsagent opposite… nearly  a week on and its still insitu, what a proud ‘mum’ i am 🙂 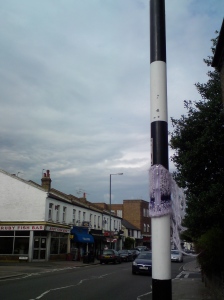 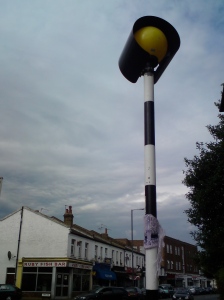 03 Jul This entry was published on July 3, 2009 at 5:34 pm. It’s filed under Knitting, Yarn Storms and tagged knitting graffiti, the fastener, yarnbomb, yarnbombing, yarnstorm. Bookmark the permalink. Follow any comments here with the RSS feed for this post.